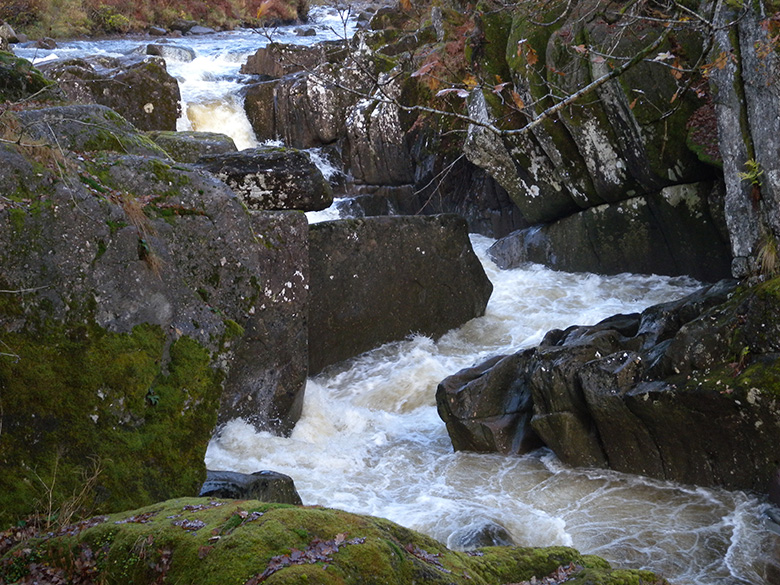 The leaders had a choice of woodland path,
But, Frost-like, took the one less trodden by.
The track we left was broad and firm and straight.
The other deep and dark where dangers lie.
But then, we would have missed the restless Falls
Pitched, with incessant roar, among the rocks
Into the midnight pool; and forfeited
The hoarded gold of annual equinox.

We never really meant to climb the hill.
The route ahead, mapped out in pink, was clear:
A beaten track between the bracken, where
The shepherds came to market year on year.
But then, we would have missed the curving view
From Ben to Wallace and the Castle tower;
The sunlight glinting on the silky Forth
Beyond Kincardine’s roofs, and Grangemouth’s power.

We didn’t have to wade the tumbling burn.
Just yards off course, another path espied
Led to a bridge, built with the sole intent
Of crossing, dryshod, to the farther side.
But then, we never would have known the strength,
Sliding from rock to stone, of friendship’s hold;
Nor, child-like, revelled in the mountain stream
Scalding our sunburned legs with startling cold.

We never really meant to go again.
The stabbing ice-shards on the barbed-wire fence
On Tinto Hill pierced more than flesh and bone,
Obliterating thought and numbing sense.
But then, we never would have known the awe
Of Winter; nor the soft, sweet path of Spring;
Nor lazed at ease beside the burning loch;
Nor chased the bronzed birch through the purple ling.

There’s no real need to cross the thorny ground.
The short cut’s easy if the hill is steep.
And if we turn back early who’s to mind?
No-one compels a promise made to keep.
But then, a nine-mile life seems long and dull
With little volunteered and little won.
Fixed routes, bleak views, barred gates; and at the end
The master’s comment on a walk half-done.